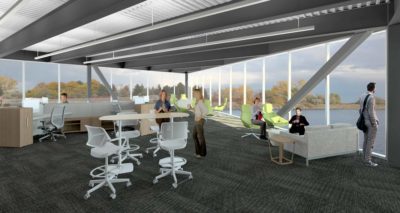 Designing buildings for clients who intend to own and occupy them has some advantages, including the ability to incorporate features that cost more initially, but pay for themselves over a short period of time. One such feature is the raised floor, which is an elevated floor of removable panels built above the structural floor.

Most people are familiar with raised floor systems as a means for facilitating electrical and data cabling in office buildings and data centers, but these floors can also distribute air and sprinkler piping. In-floor air distribution has been shown to improve employee health and productivity, while also reducing energy costs; all of which helps pay for the additional cost of the floor over time. So while some of you may have thought the problem with the picture is that there is neither an acoustical ceiling nor exposed ducts, when a raised floor is used to distribute air and combined with an acoustic structural deck, the design shown above is possible.